I hope you and yours had a very merry Christmas!

I had planned on taking a few days off of blogging but certainly didn’t plan on a whole week!

Our Christmas was pretty fantastic.

Thing 2 had to work the early shift on Christmas morning but I still got up early.

I had muffins to make and deliver to her at work! 🙂

We did gifts when she got off work.

Let me tell you something – we clearly are still children because that was the LONGEST. WAIT. EVER! We kept looking at the gifts and then at the clock and then out the window. #impatient

Then, it was time for Christmas dinner!

Of course, we grilled our turkey. Thank you, Mother Nature, for giving us a gorgeous day for it! 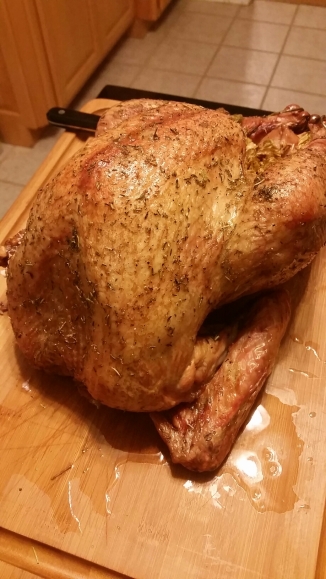 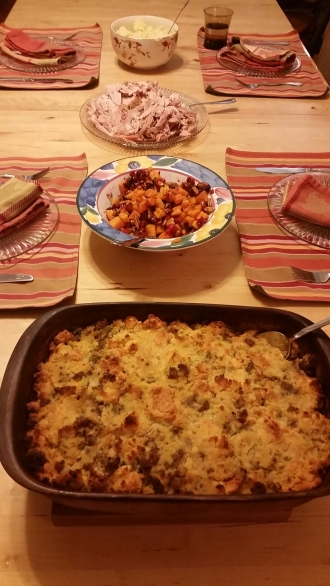 And then the  flu set in and we’ve been down for the count ever since.

I’ve literally been on the couch since Friday. It’s my new home.

There are only a couple of pictures of my misery. 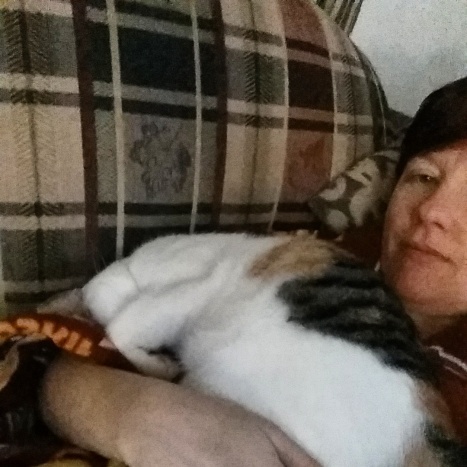 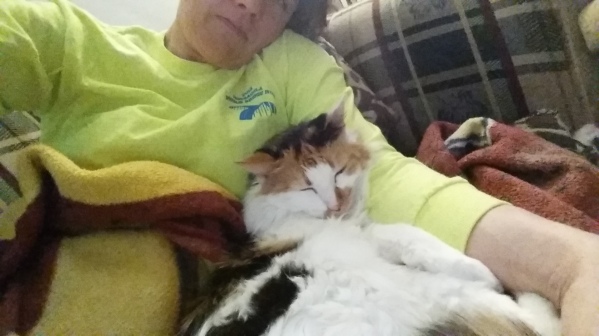 Thing 1 came up the day after Christmas and took one look around and decided she was better off at home. It was nice to have her here but I understood her early departure.

My sailor got hit pretty hard too – he’s a day or so behind me in the recovery process so this New Year’s holiday and weekend is going to be filled with rest and recuperation rather than parties and celebration.

Speaking of the new year, ’tis the season for those resolutions!

Are you making any? Did you make any last year? How did that work out for you?

I find that most people make resolutions in hopes of “changing” something fairly ambiguous (usually revolving around a number on a scale) like a behavior. “I resolve to lose weight!” or “I resolve to get back in shape!” Gym memberships tend to spike in January and then, by February, all those “resolutioners” are back on their couches because they didn’t actually set GOALS.

Smart, attainable goals that allow you to see results and move forward from there!

I’d already been thinking about my goals for 2015 but all my recent time on the couch has afforded me some extra time for reflection. At least, when my brain wasn’t foggy, that is.

Well,  I have a few fitness goals. Barring any unforeseen accidents, one goal is to stay physically healthy. I should be able to manage this by working more on mobility and flexibility, upgrading my shoes on time, and listening to my body. Getting back to back fractures in my feet really stunk and I do NOT want to go down that road again. I also plan to run just because I love it. I’ve kicked around the thought of still shooting for a 50k. I obviously haven’t gotten the okay to run from the orthopedist (now THAT would be a sight since I’m still in the boot! ha!) but, once I’m clear, I just want to enjoy my time out on the road. I’ve got plenty of time to do a 50k if that’s what I decide I want to do. As far as CrossFit is concerned, I plan to really work on achieving chest-to-bar pull-ups, strict ring dips, and a bar muscle-up.

In case you missed it, I am starting back to school on January 5th! I’ll be completing my undergrad science pre-requisites this year and completing my application into the Coordinated Program in Dietetics. My goals are to earn all As and have a perfect application packet. 🙂

A friend/colleague of mine recently suffered a huge health problem. She went in for a hysterectomy and, while the doctors were operating, they discovered she had a severe case of flesh-eating bacteria. It was literally eating her from the inside out. She had 13 (!) surgeries, flat-lined twice, and spent some time in a coma. She was in the hospital for numerous weeks. During her first week back at work, we talked about some of the things she had experienced. She told me about this dream/vision she had during the second time she essentially died. I won’t go into the details because, well, it’s not mine to share and it was also a little scary but basically, she saw the face of evil. The take-away she got from it was that she needs to love people more. But not just her family and friends. ALL people. Especially the ones she doesn’t want to love.

I happen to think that’s an excellent idea.

There is entirely too much negativity and hatred in this world. But, just because we’re surrounded by it doesn’t mean we have to let it into our own world.  We certainly don’t have to add to it. Maybe we can even help to change it. A smile and a kind word go a long way, even if you’d rather give that person a piece of your mind instead. So, in 2015, my goal is to love more and to get involved with a humanitarian organization in my community.

Well, there you have it. It’s going to be a busy and fantastic year!

If you’re heading out to celebrate tonight, have fun and be safe! 2015 won’t be the same without you. 🙂

2 thoughts on “Holiday reflections and looking forward to 2015”