Well, it has been a whirlwind past few days!

Thing 2 and I flew out to Cincinnati on Saturday. 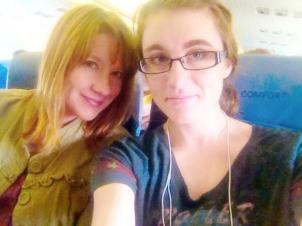 Our flight took off a few – okay, more than a few – minutes late so we had just enough time to get from one gate to the other in Atlanta so we could board the next flight. That meant no lunch.

When we got to Cincinnati, we were greeted by a Marathon welcoming committee!

(Okay, so that totally sounds like they were waiting for us at the gate but it wasn’t like that. They were down in the baggage area. I’m special but I’m not THAT special.) 🙂 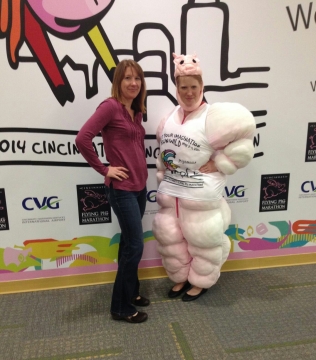 They gave us goodie bags with granola bars and a big ole bar of dark chocolate! They also had bottled water which was really nice since we were parched.

We caught the shuttle over to our hotel – the Embassy Suites Rivercenter in Covington, Kentucky – and got all checked in and started prowling for food. Unfortunately, apparently everything rolls up at 2:30 on a Saturday afternoon and the Subway and Starbucks were closed. What the heck? So, still, no food.

We caught the trolley over to Cincinnati and made our way to packet pickup and the expo – 2 different locations: 1 for the bib and 1 for the expo and t-shirt & goodie bag pickup. I’m not sure why the t-shirts and goodie bags weren’t in the same spot as the bibs but, whatever. It is what it is and I don’t make the rules. 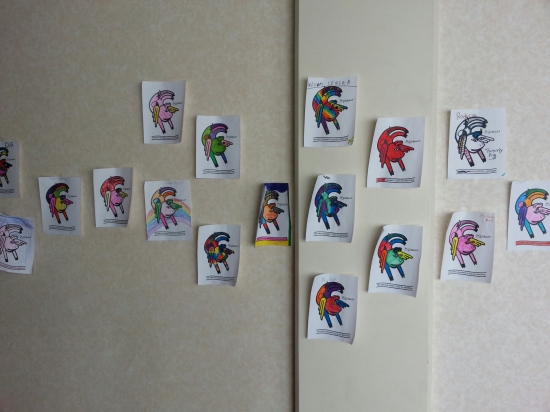 Pigcasso artwork from the local schools. So stinkin cute! 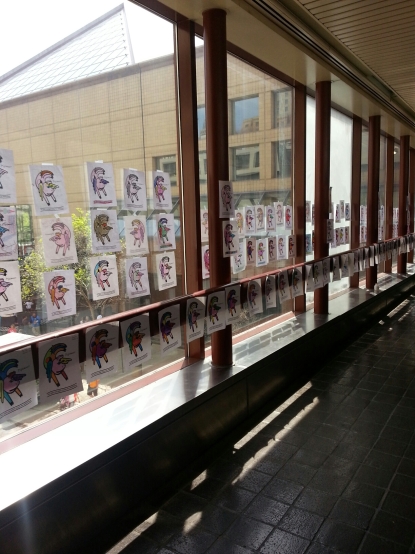 Ryan Hall (!) was at the expo signing autographs but the line was too long and, remember, we still hadn’t eaten yet. We were also trying to meet up with my friend Carla and her sister and they ere already in the expo. So, I just snapped some photos of him interacting with patient, not hungry people. 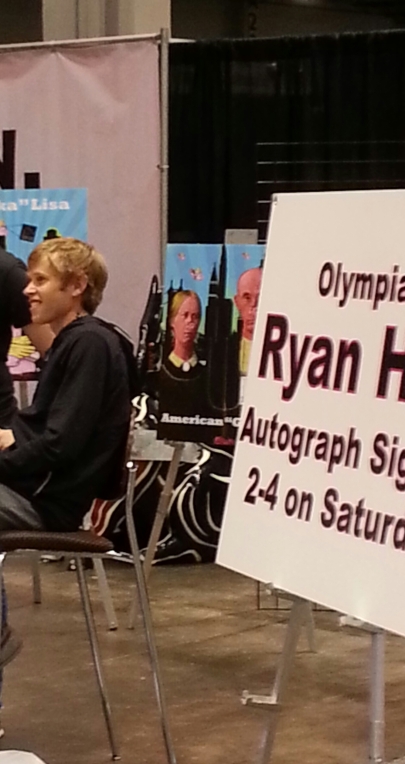 It’s hard to tell from this picture because I had to crop out some random person but Ryan Hall is seriously SMALL and he looks like a kid! Seriously. Like he looks 12. Yes, I know he’s not 12.

I should note, I never saw him stand up. Not even for pictures.

The expo was really, really big and there were so many people! Apparently, there were 36,000 runners registered!

There was a lot of stuff there – we kinda grazed on the freebies (hungry, remember?) as we wound our way through to where we could pick up our T-shirts and swag.

I kissed a pig and I liked it.

After the expo, Thing 2 and I headed back to our hotel and Carla and her sister headed to theirs. We originally had a plan to meet up for dinner but her sister wanted to shop before dinner. We were tired and just wanted to take it easy so we just split up. We had an early dinner in the restaurant attached to the hotel. I was so hungry I seriously ate all of this pasta. 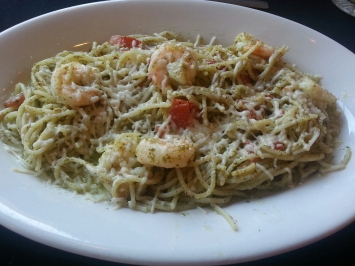 Our server had run the Flying Pig 3 times so he gave me the low down on the hills (holy hills!) and when we could expect them to be over (thankfully, mile 8 was the last big one). Back up in the room, I got all my stuff ready for the morning. 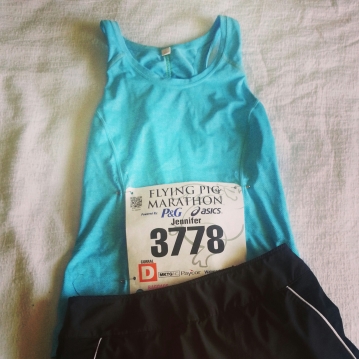 I was up bright and early – seriously, who really sleeps the night before a marathon, anyway? – and all ready to go. 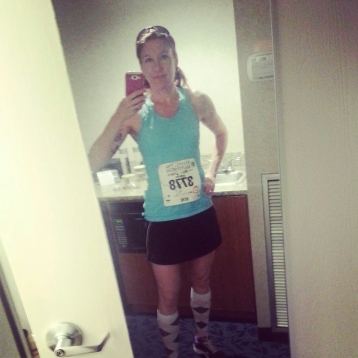 Breakfast at the hotel wasn’t going to start until 5:30 and the race start was 6:30 so I ate oatmeal up in the room before I went down to scrounge for a banana. And, the stupid faucet in the kitchenette sink malfunctioned and I ended up with WAY too much water in my oatmeal cup. Oatmeal soup. Good times.

And then, no bananas at breakfast. Apparently, they forgot that runners were staying in the hotel and runners like to eat bananas. So, I ate an orange as I walked the mile-ish over to the start. 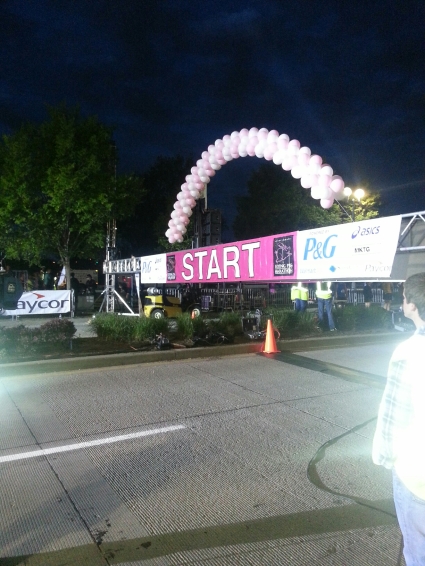 They even had a band playing near the start line! And they were pretty darned good, too! 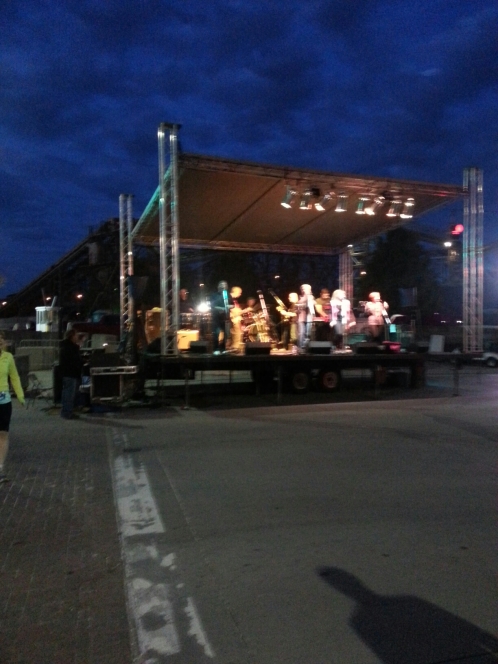 Before we headed from that area over to the corrals, there were uniformed sailors checking runners’ bibs to make sure only runners went past that area. At the corrals, more sailors were assisting and checking bibs and answering questions. I love that they were out there!

The race people in Cincinnati are SUPER smart because they put porta-potties IN the corrals as well as out!!  That’s perfect for a person like me with a finicky bladder that likes to pretend it’s empty when it really isn’t. Oh. Was that too much? Sorry.

Now, let me tell you, Cincinnati really knows how to put on a good marathon.

There was rarely a dull moment out there on the course. Crowd support was amazing, there were water stops every mile, and the entertainment was pretty stellar. If I didn’t know any better, I would have totally thought this was a Rock ‘n Roll marathon but I’ve run one of those before and this race kicked its ass.

There were themed water stops (like Blues Brothers. So fun!), stops like the Hogwash Station where they handed out both wet and dry towels and had garden sprayers if you needed a hosing down (it was kinda warm), the Greased Pig station where they were handing out vaseline and all sorts of stuff.

Carla and I both ran with our phones and we both said that we should take pictures but we were having too much fun high-fiving little kids, laughing at the signs, stopping to pet the cutest puppies ever on the planet (yes, we seriously stopped to pet puppies. what?), and just generally enjoying the surroundings and scenery.

We ran over a bridge into Kentucky and back into Ohio over another.

We stopped and took a sister selfie. (Carla and I refer to each other as sisters from another mister and mom – teehee). 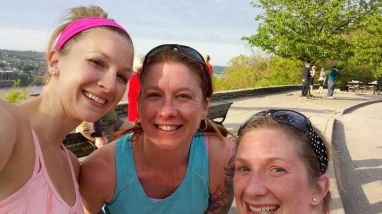 I did manage to remember to take a couple pictures while we were running. 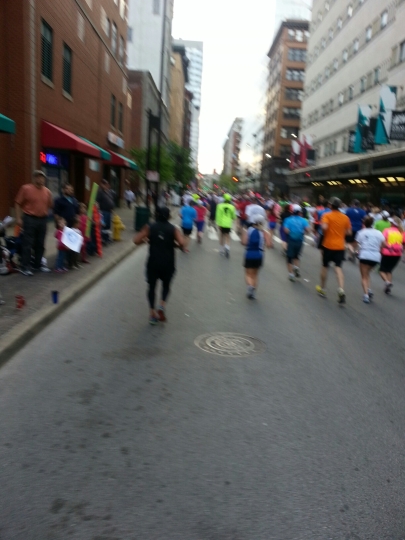 yes, it’s blurry. I was RUNNING! Don’t judge me. 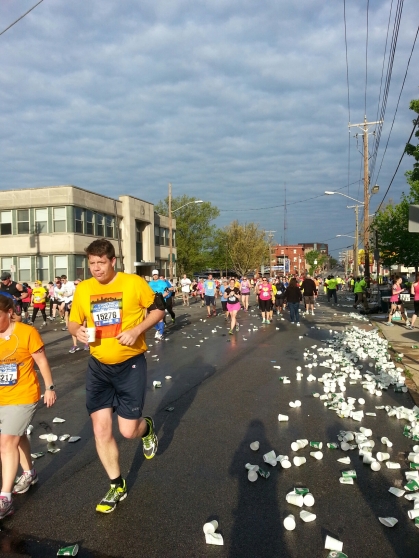 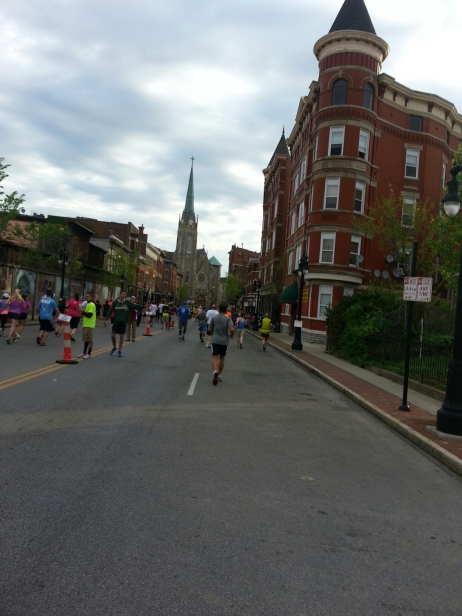 I also failed miserably at taking a running selfie of us. I look like a complete and total dork. *sigh* 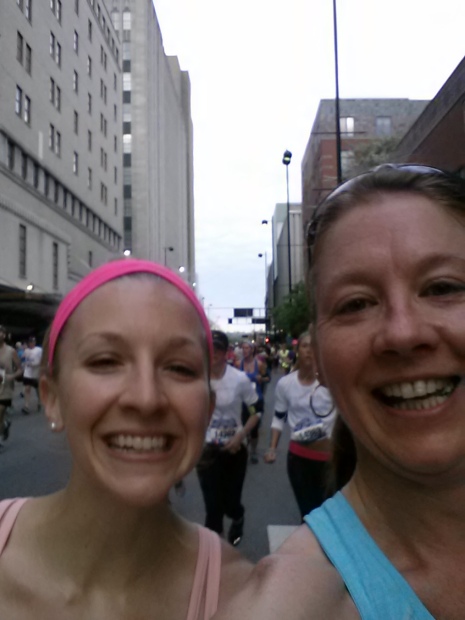 We didn’t run fast – the goal was just to finish and have a great time. My left foot cramped up some and Carla was dealing with heel spurs and some IT band issues so we made sure we took plenty of walk breaks as needed.

This one wasn’t about the time – it was more about the experience and I’ll tell you what – it was a great one. I would definitely go back and run this race again. And probably again. The city was SO welcoming and supportive of us runners and I loved every second of it. 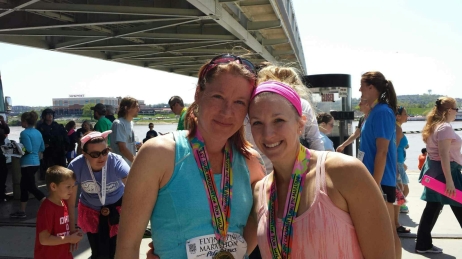 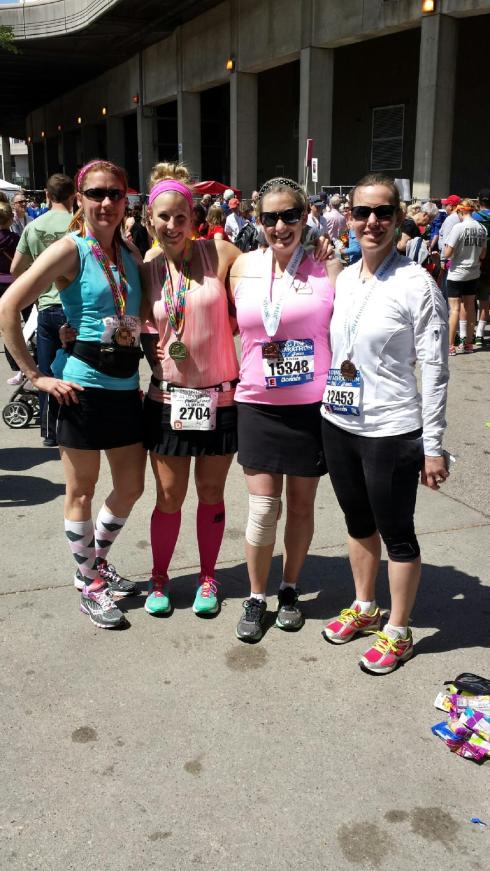 Thing 2 and I wandered around the finish festival for a few, noshing on some shave ice before we headed back to the hotel for a shower. Then, we hopped back on the trolley and went back IN to Cincinnati for some touristy business and some shopping. Because, you know, I didn’t already see enough of Cincinnati via my feet. 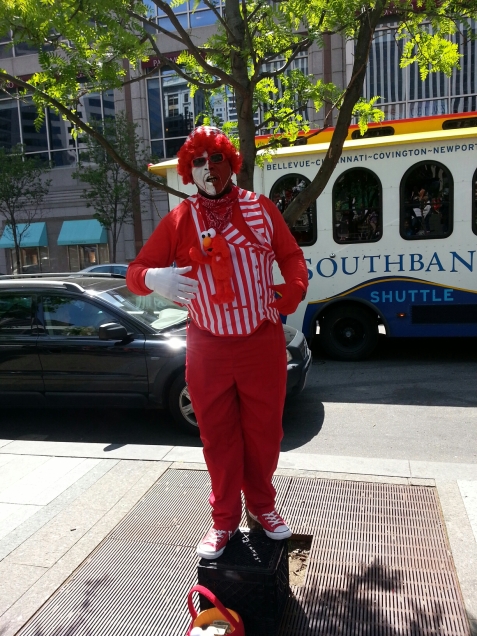 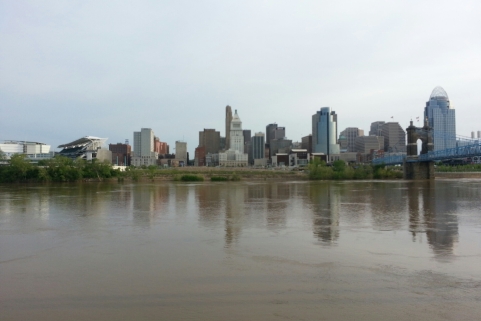 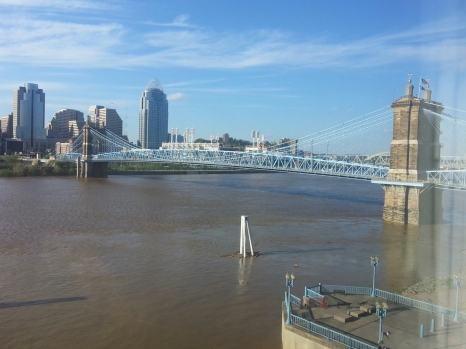 Then, we headed for dinner where I gobbled down an amazing bacon cheeseburger. YUM! 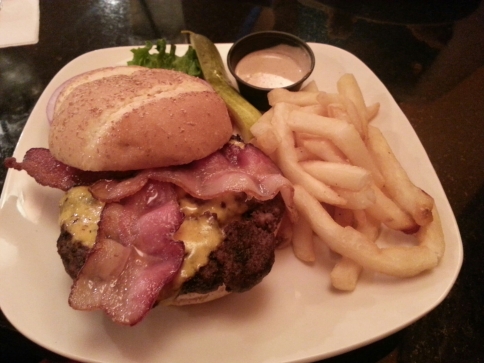 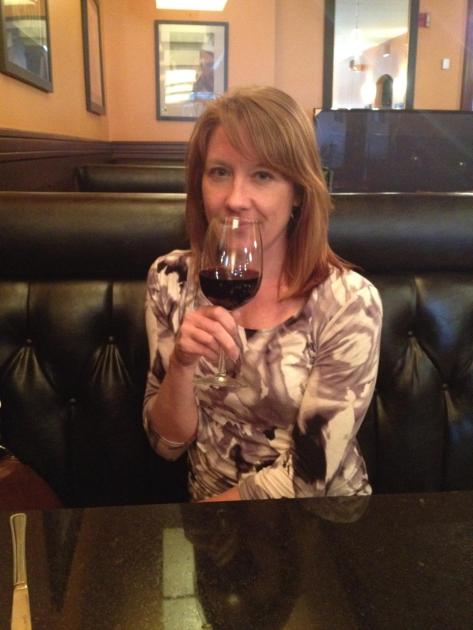 Then, it was time to leave and go home. I’d tell you all about the never-ending day of travel delays but I’ve gone on long enough already. 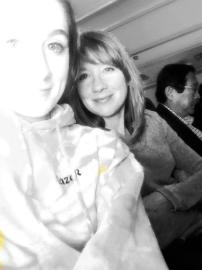 Talk to me: Have you ever run the Flying Pig Marathon? Have you ever been to Cincinnati? What about Kentucky? What’s the most fun race you’ve ever run?