Holy sore muscles, Batman! Boy oh boy, am I feeling that P90X chest, shoulders, and triceps workout I did yesterday! I didn’t really realize it until I went to dry my hair this morning. Oy! Holding my arms up and working the dryer and the round brush was exhausting. Haha! I’m glad I’m resting those muscles today – they’ll be a little more agreeable when I get back at it on Thursday morning. 🙂

So, I visited the doctor yesterday. In his opinion, I should be a doctor because he believes my self-diagnosis of a muscle strain is spot on. Um, I can’t afford medical school so….maybe I’ll pass on that but it was nice to hear that I’m pretty smart about what’s going on with my body. Sometimes, that’s the hardest part. Aches and pains can pop up out of nowhere so you want to make sure you pay attention when you notice something different. I keep a training log and try to write all of that stuff down. Of course, sometimes I forget, and then I end up in this predicament where I’m injured and I haven’t a clue what I did to get here. Don’t be like me – make sure you write it down every day! Besides, it’s a great way to track fitness improvements and it sure is nice to have that log to go back and read over and see just how awesome you really are. 🙂

Anyway, my next step is physical therapy. I’m not running until again until I meet with the therapist and, as much as that hurts my heart, I know it’s for the best. So, fingers crossed I get the call from physical therapy in a hurry (again, military medicine is not known for it’s quickness) and I can get going on my rehabilitation. Also, my doc didn’t indicate that he thought a September 1st race was going to be out of the question but, that’s something I’ll need to really discuss with the physical therapist. Do you think if I stare at my phone long enough, they’ll call?

I’ve really been working my “New Abs Diet Cookbook” lately. It seems to have inspired me and, there are loads of recipes that just serve 2 and some that just serve 1 (lunches and breakfasts)! Of course, this recipe I made most recently serves 6 but that just means leftovers for lunch or those nights later in the week when you do not feel like cooking. Most leftovers don’t last longer than 5 days in the fridge so, if you make more food than you have people, the best way to make sure the leftovers disappear is by putting them in individual containers. That makes grabbing lunch on the way out the door the next morning so much easier and much more likely to happen. I’m up before the sun anyway and I generally have time to prep my lunch box but, sometimes I hit snooze one too many times and then I’m rushing around like a chicken with my head cut off. Not fun. So much easier if I’ve already planned lunch and it’s ready for me to grab without any fuss!

Anyway, this recipe is easy, super fast, and delicious. The hardest part is the broccoli rabe. For me, the hardest part was finding it. I had to go to 4 stores before I finally found it at the Fresh Market. Not sure why I didn’t just go there in the first place. I’m shaking my head at myself. Anyway, you want to make sure you rinse the rabe really well. I trimmed off all the stems and then put the bunch in a strainer in the sink and gave it a good rinse, tossing with my hands. Then, I shook it out, put it back on the cutting board, cut it into the 2-inch chunks the recipe calls for and put it back in the strainer for another rinse. For some reason, that stuff is gritty and you don’t want to eat that. Blech! Once that was done, the rest of this came together lightning fast. Another perfect and healthy choice for dinner at the end of a long day. Win!

2. Heat the oil in a large skillet over medium heat. Toss in the onion and garlic and cook, stirring frequently, for 3 minutes or until translucent.

3. Remove the casing from the sausage. Add the meat to the skillet and break up the chunks with a wooden spoon. Cook for 3 minutes until nicely browned.

4. Add the pasta and broccoli rabe to the skillet and toss to combine. Stir in the marinara sauce and red pepper flakes and cook until heated through. Sprinkle with the cheeses.

Thing 1 and I made dinner last night. We don’t often cook together but we really should. It gives us a chance to talk, she gets to learn about cooking and I don’t have to do everything, especially after a long day. 🙂  You don’t always have to take your kids places and spend money to have quality time. Cooking meals, coloring pictures, walking the dogs, or whatever – all these things are great ways to hang out with your family. Just don’t forget to open your mouth and talk! 🙂

I found a recipe for a baked ziti dish low on fat and calories and chock full of delicious veggies. You know, when you throw loads of veggies into your pasta dishes, that tends to take up the space for a whole bunch of extra cheese. Now, don’t get me wrong, cheese is great. Especially Brie. I. Love. Brie. But, too much can certainly take a dish from healthy to not in an extremely short amount of time. And, I’m a runner – runners love pasta but we don’t often appreciate all that fat making us feel sluggish out on the road. This dish won’t make you feel that way, I promise! And, it’s guaranteed to make your sailor (and maybe even your kids) ask for any leftovers to be put in a lunch container for the next day. Hearty yet light, the summer veggies add fabulous and delicious pops of color to this ziti. What are you waiting for? Grab a family member or even a friend and get to cooking!

4. Combine ricotta, remaining salt, and egg. Stir into pasta mixture. Spoon into an 8-inch square glass or ceramic baking dish coated with cooking spray; sprinkle with remaining mozzarella. (Okay, fine, I used an oval stoneware dish. Worked out petfectly!) Bake at 400 degrees for 15 minutes or until bubbly and browned. 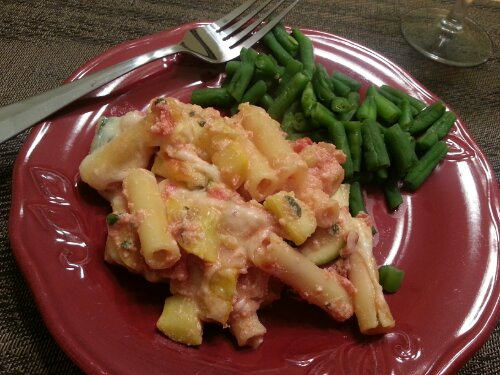 As hard as I have tried, I have been unable to keep the sickness that’s going around out of my house.  Thing 2 brought it home.  Schools….the breeding ground for all manner of cold/flu/ickiness.  The Marine Corps Marathon is right around the corner – 13 days! – and I do NOT need her sharing her germs with me.  So, short of putting her in a plastic bubble or me moving out, I’ve decided to buy stock in Lysol and make soup every night for the next 2 weeks.  Ha!  Just kidding.  Who’s got money to buy stock?!  Okay, seriously, we’re not having soup for the next two weeks but that would certainly be an adventure if we were!  Anyway, it seemed the perfect time to try a minestrone recipe from my new Abs Diet Cookbook.  Surprised that it didn’t come from my Crockpot cookbook?  Yeah, so was I – especially considering it’s a crockpot recipe.  It’s creatively called “Dump and Go Minestrone.”  I really think they could have come up with a better name than that but the idea is accurate – open cans, dump contents into crockpot, turn crockpot on, and go.  Gotta like that!

I’ve made quite a few minestrone soups in my day – some better than others – and this one goes on my good list.  I left out the spinach because I didn’t have any and didn’t have time to stop at the store on the way home but I don’t think the recipe missed it….nor do I think Thing 2 missed it.  (Seriously, what kind of mom would I be if I made a healing soup and stuck a vegetable in there that my kid really would prefer to NOT eat?  I’m not trying to win the “worst mom ever” award!)   I also used 6 oz pasta instead of a whole package as the recipe called for and that is definitely a good thing because I’m not sure where the other half of that pasta would have gone!  My crockpot was super full already!  Healthy, healing chicken broth, protein packed beans, whole wheat pasta and more all in one easy to pull together meal guaranteed to make even the sickest of teenagers feel a little bit better – it’s like Mom in a crockpot!  🙂 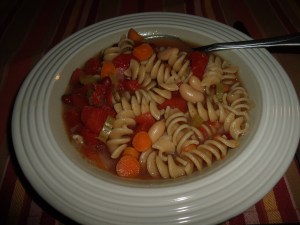 1.  Dump all of the ingredients, except pasta and spinach, into a large slow cooker.  Stir to mix.  Cover and cook on low for 6 to 8 hours.

2.  Cook the pasta according to the package directions. Add the pasta and spinach to the cooker and stir. Turn up to high and cook for 10 minutes. 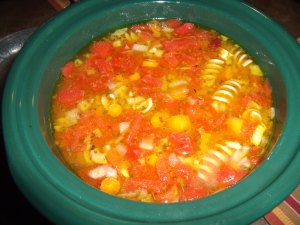