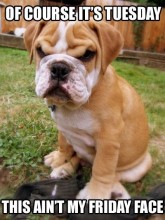 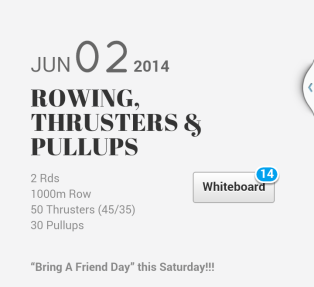 I had planned (and by planned, I mean hoped really hard) that I would be able to kip all the pull-ups.

Um, yeah. Not so much. I got through 7 of them and then ran to go get a band.

I really should have planned ahead and had the band there from the start. My shoulders felt tired before we even started. When will I learn to listen to my body?!

My second row was just a tad slower than the first (maybe 10 seconds?) so I was pretty stoked about that.

Those thrusters. Definitely felt those this morning when I got out of bed!

On deck for tonight is deadlifts, burpees (hooray) and running (hooray!!).

(can you tell what makes me happy?) 😉

So, remember that awesome book Thing 1 got me for Mother’s Day?

(if you don’t, it’s the Runner’s World Cookbook)

Well, I decided I needed to try one of the pre-run shakes, except I wanted to adapt it to fit my nutritional needs for CrossFit.

Since I’ve been going to CrossFit after work, I’ve been working really hard to balance what I eat so I’m both fueled up for a tough workout but not overstuffed, if you know what I mean.

I tend to be a creature of habit and can seriously eat the same thing every day for a full week  because it’s easy and I know it works for me.

Well, that’s all well and good (and pretty doggone boring) except I was eating protein bars and I’d prefer to eat real food.

I generally eat 5 times a day (sometimes 6 if the ice cream is yelling at me from the freezer. gotta shut it up, you know.) – breakfast, morning snack, lunch, pm snack, and dinner.

PM snack has become my difficult meal – I’m hungry and I know I need to fuel up (especially with protein) but I don’t want to overfuel and have an upset tummy at CrossFit. On the other side of that, I don’t want to underfuel and run out of energy. Cuz that really sucks.

Gah! You would think eating wouldn’t be so difficult!

Anyway, I saw this pre-run shake recipe and knew I had to try it. It’s all real food and would definitely be easy on my tummy. The only question was whether it would be enough to keep me going.

Well, it did! I didn’t run out of steam at all. The workout kicked my butt but not because my body wasn’t fueled enough.

Like I said, I changed it up a little (you know, I just can’t help it) and made sure to get more protein packed in there. Whipped it up in the morning and kept it in the work fridge until I was ready for it.

(Ideally, I’d have a blender at work and make it right when I wanted it but ain’t nobody got time for that.) 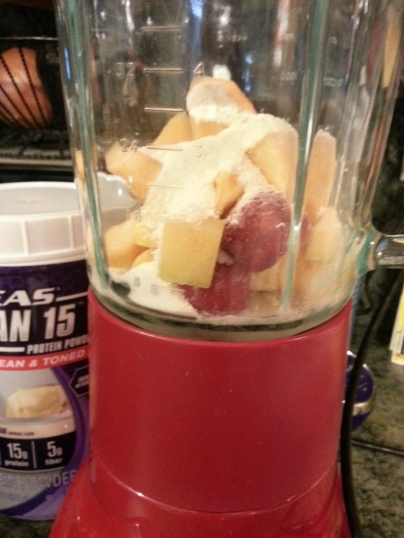 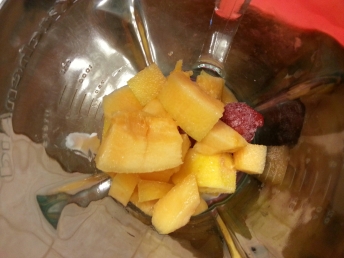 Puree until thick. Pour into glass or shake bottle; top with granola.

If you’re using the shake as a pre-run shake, you might want to leave out the protein powder. I only added it because I know my body needs the extra protein to help me power through a workout. Also, if you wanted to change it up a little more, you could use whatever flavored yogurt you want. And, if you don’t have vanilla almond milk or use soy milk or something else, add a teaspoon of vanilla extract. Or, peppermint if you want. It’s your shake – make it how you want it to taste! And then go on with your bad self and get your sweat on! 🙂

Talk to me: How do you fuel before workouts? Do you prefer to workout in the morning or evening?

Hello! Well, we made it. It’s time to do the Friday dance!

I’m so ready for the weekend. Are you? It’s been a busy week and I’m looking forward to some down time. Okay, so I’ll be cleaning and doing laundry but that makes me happy so it doesn’t count as work. I’m also hoping for some great weather. I’ve been trying to grill for the past few nights but Mother Nature keeps giving us thunderstorms. But, dinner still turned out fabulous – was just missing the grill marks. 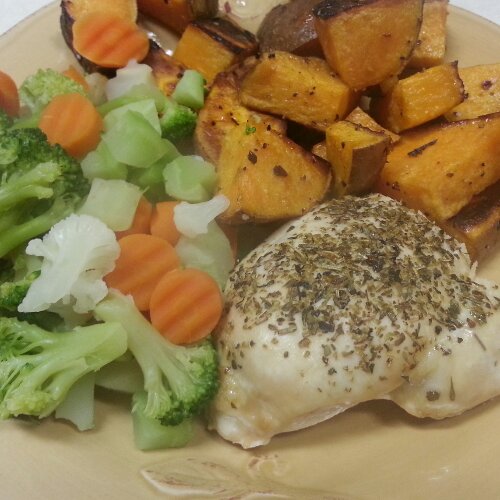 I don’t know about you but I did not want to get out of bed this morning. Not one little bit. But, I did. CrossFit. Yes, I’m addicted.

I was browsing a TON of web sites and paleo recipes the other day and I came across one that looked interesting. A pre-workout shake. I decided to give it a try. I was normally making oatmeal but this would save me time. 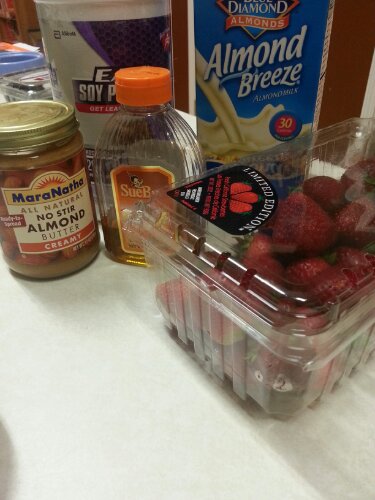 1 1/2 cups unsweetened vanilla almond milk
Serving protein powder (I used chocolate because that’s what I have. Recipe calls for unflavored to cut out the extra sugars)
1 teaspoon honey (preferably raw, which I don’t have)
1 scoop almond butter (I used about 1/2 tablespoon)
Strawberries (I decided to add these just because)

Blend it all up and enjoy!

And it really held me over! I wasn’t sure if I was going to lose energy because I didn’t eat solid food but I didn’t. I was totally energized and ready to power through the workout. This is my new go-to 4am pre-WOD snack. Om nom nom!

Here’s what we did this morning. 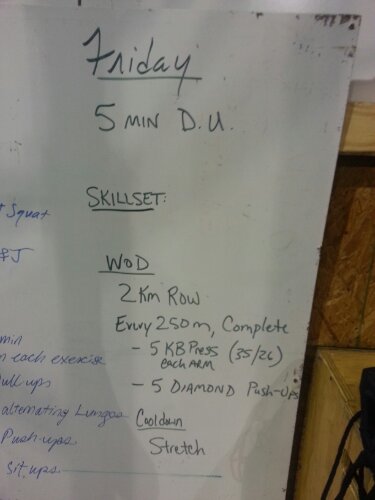 Seriously? 26# kettlebell press? My shoulders are STILL sore from all those snatches on Wednesday. Fine! 🙂

It really was an awesome workout. Drying my hair after my shower was more difficult. 😉

So, I’m not sure if you know but my blog has a Facebook page. There’s a little button over there on the right that will take you there. You can like it too, if you wish. I generally try to blog every day but some days, well, I order pizza so I have nothing new to share. But, I also share other things on my page that don’t make it into the blog like articles I’ve read with training tips, motivational stories, or just things that I thought were interesting and decided to share. Or, maybe it’s just easier for you to follow my blog that way. Just a suggestion. 🙂 Anyway, I’m also on Twitter (also a link over there) but will throw out the caveat that I’m a big Redskins fan and during football season, well, I can get a little heated on Sundays. #justsayin 🙂

I made a bunch of extra chicken last night so I could use the leftovers in other dishes. First up, lunch! This is really such a simple idea and you can certainly adjust it to your tastes. It’s basically a sandwich taken to the next level. This isn’t your old-school balogna sandwich that your mom used to pack in your lunch box! 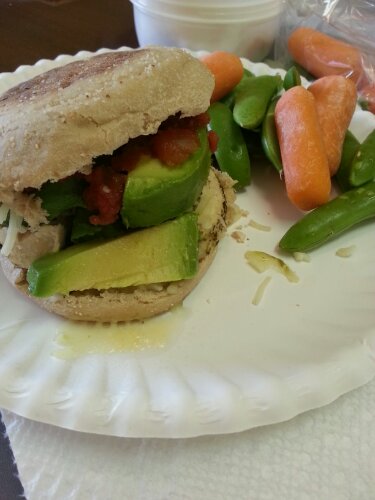 It’s really good cold but if you have the means to heat it up a little? OM. NOM. NOM.

What is your go-to pre-workout snack/meal? How do you feel about sandwiches? NFL fan? Do you have a favorite team?