Can you believe Christmas is seriously only 2 days away?

Will you be tracking Santa this year?

Gosh, the internet is such a wonderful thing! Remember when we were kids and we just had to cross our fingers and hope that Santa was going to make it around the world in time, wondering where he was right at that very moment, trying to stay awake so we could hear the reindeer land on the roof?

We hoped our carefully handwritten letters were mailed on time, that the Santa in the mall remembered to pass along our whispered Christmas wishes to the elves, and boy, oh boy, what were we going to do now that we’ve moved into a house with no chimney!

Now, we can email Santa and track his every movement. Nope, that’s not creepy at all. 🙂

We never really did that – probably because the dogs would have eaten the cookies before Santa showed up, anyway.

Anyhoo, in honor of it being Tasty Tuesday (you almost forgot, didn’t you?!),

I thought I would share some of our Tasty Christmas Traditions.

We always go out for breakfast for dinner.

We’ve been doing that since Thing 2 was a tiny little Thing. It’s so fun! It’s nice and relaxing and easy. Our challenge, because we were always moving, was finding the place that both served breakfast all day and stayed open on Christmas Eve. Thanks to the internet, that’s so much easier these days. 🙂  Then, we go and check out the Christmas lights. 🙂

I don’t remember when it started but for many, many years now, I make these muffins on Christmas morning. 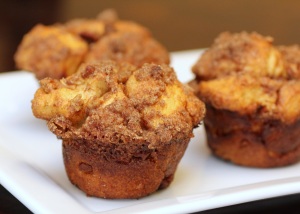 They are the Cinnamon Cobblestone Crunch Muffins from The Pampered Chef®.

I typically pre-prep the cinnamon pecan mixture the night before and get up early and get them in the oven. We eat them warm, drink OJ or mimosas and coffee (adults only!) and take our time getting to the presents. The Things didn’t enjoy the waiting so much when they were little but, after a few years, they saw how fun it was to just hang out as a family before the madness started. 🙂

For Christmas dinner, we either do a ham or a turkey (depends on what happened at Thanksgiving) but either way, they’re ALWAYS cooked on the grill.

When I was growing up, I didn’t like turkey. Strange, right? Well, I didn’t. So, my mom always had a ham slice for me. Then, one year, my dad grilled the turkey.

I was hooked and it became a thing that always had to happen. I’ve never once cooked a turkey in the oven. I don’t care if there’s a blizzard outside, if we’re having turkey, we’re grilling it. Om. Nom. Nom.

Talk to me: Do you have any tasty Christmas traditions? What are you most looking forward to?

Are you presently under attack by Mother Nature?

I’m just waiting for the storm to get here.

Um, I’m sure you can guess what I’m hoping for.

So, yesterday, I did not run when I got home.

I helped unload and stack 1/3 cord of wood from my sailor’s truck!

And, that was pretty good exercise, too.

I’m cutting myself some slack on the running right now.

I love running and I don’t want to NOT like it because I’m forcing myself to do it.

Besides, it’s flipping cold outside.

Okay, enough about the weather. It’s about time I shared a new recipe with you!

I’m all about making things as easy as possible now that I’m back at work and this recipe from my Clean Eating cookbook was definitely easy!

Turkey meatballs nestled in a bed of black beans, corn, and tomatoes. 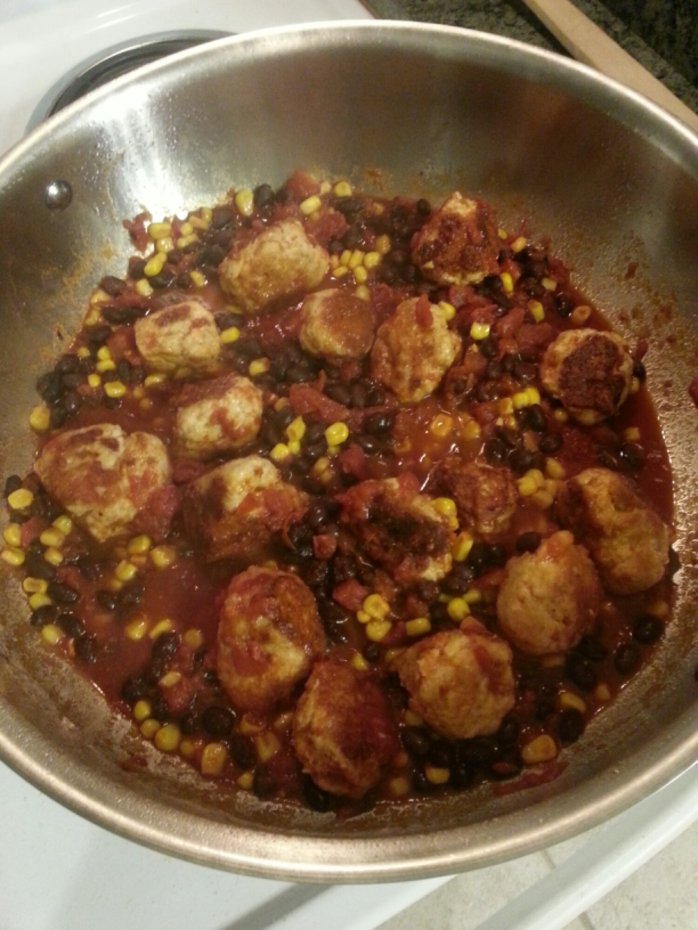 Add a green veggie or salad if you want to pretend like you’re really healthy. Or hungry. Like me. 🙂 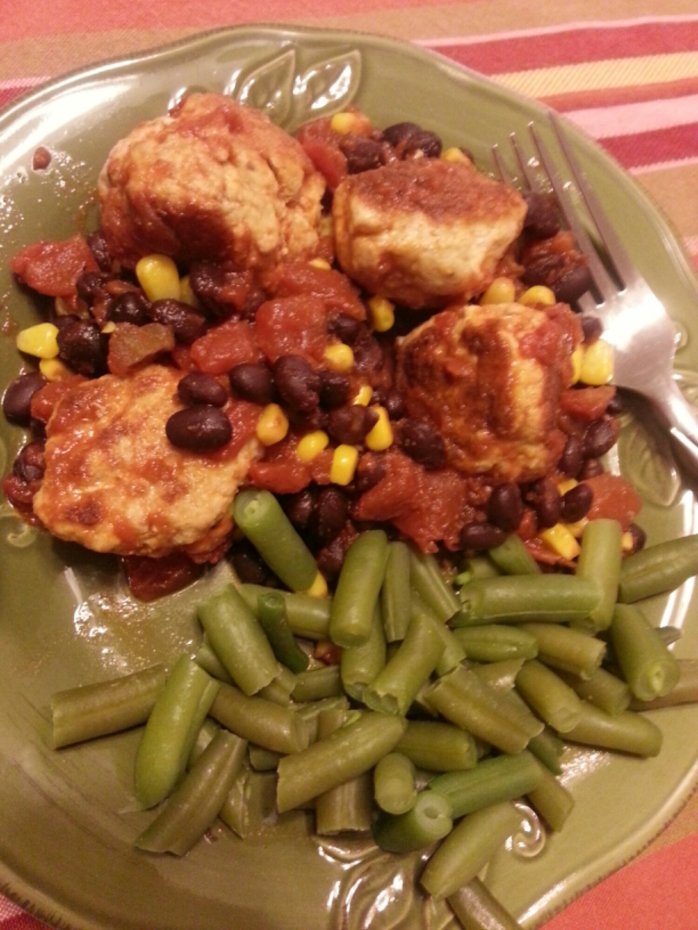 1. In a large bowl, combine turkey, egg whites, bread crumbs, salt and pepper and mix well. Shape into 16 meatballs, each about the size of a golf ball.

2. In a large skillet, heat oil on medium-high. Add meatballs and cook for 3 to 5 minutes, turning frequently, until browned on all sides. Add corn, beans, tomatoes, broth, lime juice and cumin and mix well. Reduce heat to medium, partially cover and cook for an additional 3 to 5 minutes, until meatballs are cooked through. Stir in cilantro and serve.

Talk to me: Meatballs – love em or leave em?

Happy Thanksgiving from my zoo!

Have you come out of your food coma yet?

Or did you come out of it last night and hit the stores for some Black Friday deals?

I did Black Friday once.

Oh, not the “go out at midnight and fight people for TVs” Black Friday – I can barely stay up past 9 pm! – but I did the “early Friday at the mall, stay there all day and deal with crowds I hate.”

Once was  DEFINITELY enough.

Anyway, I hope you had a wonderful Thanksgiving and were surrounded by the people you love. 🙂

We were short one in my house.

Can’t remember the last time I set the Thanksgiving table for less than 4 people!

I’m so thankful for all of my family, even if they are growing up and moving away and on into adulthood.

But, even though it was just 3, I made enough food for at least 8 (of course) and we have leftovers for days.