The movers delivered our stuff on Tuesday and then, the DirecTV guy showed up to get us all set up.

Did I mention it was like 30 degrees that day and windy and the doors to my house were wide open?

Yeah.  We were totally wearing hats and gloves INSIDE the house.

I’ll be honest – having the military move you is a pretty good deal.  They pack you up – if you don’t want them to pack it, you better hide it in your car or something otherwise, it’s getting packed! – they load everything, deliver it to your door, unload, put everything where you tell them to, reassemble furniture AND, if you wanted them to, they’d even UNPACK for you.

I did it once.

It took 3 weeks for me to find my bed.

Not my actual mess, thank goodness. But, it looks pretty similar to what I dealt with.

Anyway, a military move is pretty sweet. Except, they pick the crews. We’ve had some really awesome crews in our history of military moves. This last one that delivered and off-loaded us? Um, not so much.  We ended up stuff in random places – definitely NOT where we told them to put it – and they were slow and just plain odd. We were so done with them that we even  told them we would happily reassemble our furniture just so they would leave.

Anyway, we’re in and we’ve been swamped with the task of unpacking.

Of course, the living room (and TV) had to get set up first.

Then, I wanted my dining room table. 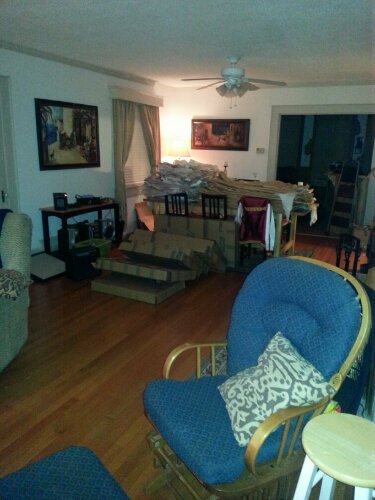 Really, the table’s under all the packing paper! I promise!

It took 3 solid days of unpacking boxes to get my kitchen together.

And then, I made brownies to celebrate.

Because, brownies are awesome.

And we still have SO MUCH MORE to do!

Ah, such are the joys of moving. 🙂

Of course, these past few weeks have been hell on my training.

I still have a marathon I’m supposed to be training for.

So, I really need to buckle down and focus.

I’m generally able to do that but, when I lack a routine, it’s hard for me.  Luckily, I found an 8-week training plan that should help me.

An 8-week marathon training plan is definitely NOT recommended for everyone.

Especially if you’re a novice and/or training for your first marathon.

It’s probably NOT the best thing for me either, to be perfectly honest, but I’m going to give it a shot.

Question: Are you structure/routine oriented or does change not affect you?